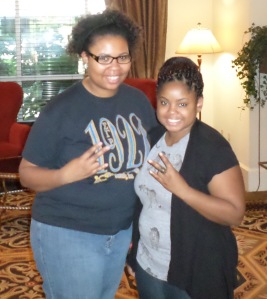 My Soror Hydeia Broadbent and I

On October 1, I set a personal challenge to blog daily for the entire month. I can officially call this the month of trials and patience. I knew going into this challenge that there were potential factors that could prevent the completion of the mission. However, I told myself that I was going to do it. I wasn’t going to allow those stipulations to get in my way. If anything I had to prove it to myself that I could write a post for 31 days straight. I saw other bloggers do it without creating a challenge so I thought this would be simple. I was so wrong.
Before the challenge began, I started drafting ideas and setting them in my blog planner calendar. I knew who would be featured for this month’s PHREAdom Leaders and any general blog posts. I wrote three of the seven days. I just started the challenged, and was already behind by the first week. I needed to do better. After all this challenge was about me, Crystal.
As a result, I definitely didn’t blog daily, but I did accomplish so much more. I managed to compose eight blog posts including a very special PHREAdom Leaders feature with my friend and survivor Ashley Gonzalez. I stepped outside the box to create new content for my blog posts like the Pinterest Wedding and the short posts about teamwork and friendships. For the second time in a row, I volunteered at the Avon Walk in Charlotte where I met and interacted with some great women and families who were either supporters, survivors, or currently receiving treatment for breast cancer. The highlight of the month was having lunch with my soror, Hydeia Broadbent. She was in Columbia, S.C. for the South Carolina HIV/AIDS Conference. It was great chatting and bonding with her especially since I interviewed her for The Aurora, Sigma Gamma Rho Sorority’s Inc.’s bi-yearly magazine.

I learned three valuable lessons. The first one was life will throw you curve balls, but the way you hit it will determine the result. I set out with a purpose and challenge for myself, but those curve balls went full speed. I hit some strikes, fouls, but I’m still in the game. The second lesson was to look at every situation and find the good in it. I could take being laid off in 16 days as a negative situation, however, I’m not. I see the opportunities are slowing aligning. The very last lesson is quite simple — be realistic. I wasn’t realistic about my challenge. I’m joining a new challenge that starts today with Britni Danielle called the Black Friday Challenge where I spend the next 30 days accomplishing a goal. My goal is to realistically blog more (at least once a week) and stick to it.