Every 9 seconds in the U.S., a woman is assaulted or beaten as a result of domestic violence. Is it worth your time to end it?

Ashley Gonzalez says she won’t let another woman suffer on her watch.

The single mother of two juggles working and attending Charleston Southern University full-time, to ensure a wonderful future for her children. Rewind almost a decade ago and you won’t recognize the former South Carolina Teen Pageant contestant as the headstrong woman she is today.

Gonzalez is a former victim of domestic violence.

While the majority of Summerville High School’s class of 2003 graduates were preparing for college, military, or the workforce, Gonzalez was anticipating joining her fiancé in Texas. Following her 18th birthday, the teenage lovers secretly got married that September. Gonzalez became a young military wife in a small area with no friends or family.

The teenage bliss slowly changed into a marital nightmare. The once best friends became enemies. Their playful date nights and love transcended into the violent attacks.

“It (the abuse) was a slow start,” Gonzalez said. “It started with the name calling then shoving and from shoving to choking then the hitting.”

Gonzalez believed that her now ex- husband, did in fact love her at one time. The survivor says that they were too young and had no idea of how to be married that abuse became his way of handling their issues.

“His friend was hitting his wife,” Gonzalez said. “He (her ex-husband) thought it was okay.”

The former military wife did not have a strong support system in Texas. Her family and friends were phone calls and letters away, but she says no one was physically there.

He not only physically abused her, but things also became psychological, Gonzalez explains. He claimed to be the only person that loved her.

The former pageant contestant lost herself while in Texas. Gonzalez says she didn’t look at herself in the mirror, and stopped taking care of herself. She describes how she no longer wore makeup and only styled her hair in ponytails. She wanted to prove her love to him.

“I grew up not knowing what love was,” Gonzalez said. “I didn’t love myself. I wanted to prove my love to him.”

“My mom flew twice to get me,” the football mom said.

The first time was when her mother found out about the nuptials. The second time her grandmother came along, but only made it to Dallas before she changed her mind to go back to her ex-husband.

Shortly after her mother’s last attempt to bring her back to Summerville, the couple had their most gruesome fight.

“That’s the day I decided to fight back,” she said. The former beauty contestant describes how physically altered her face became after an exchange of blows broke a bone under her eye. 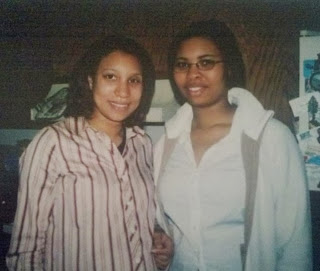 Ashley and I at her baby shower.

In June, the former military wife discovered she was pregnant. The couple had already decided to move back to Charleston. The soon-to-be mother was planning on leaving before he left the military base. He didn’t want her to, leading to a scuffle.

“By the end of the argument, he pulled my hair and smacked my face,” she said.

On July 1, 2004, Gonzalez left Texas and moved back to South Carolina, underweight and with visible facial deformities. She was away from him, but did not officially.

“My grandmother picked me up from the airport, and she asked me why I looked different,” Gonzalez said.

She had no idea. Her eye was pushed back by 3 centimeters. The 19-year-old was two months pregnant, weighing less than 100 pounds.

Everything changed on February 7, 2005 when a precious little boy was born. Her ex-husband came to the hospital after Gonzalez delivered their son, and took him out of the maternal grandmother’s arms.

“You’ll see him more than I will,” Gonzalez recalled her ex-husband’s saying.

A few weeks later, he went to his mother-in-law’s home where Gonzalez was residing. He snatched the newborn out of her arms and called her a bitch. That’s when the tables turned.

“I told him that from that day forward I wanted nothing to do with him,” the survivor said.

The “Houdini father,” Gonzalez’s nickname for her ex-husband, last saw his son when he was two years old. For the last six years, there’s been no sight of him.

The couple divorced a few years ago. Some people were supportive, but others weren’t, she explained.

“I was looking to be loved, but in the end, I just need to love myself,” Gonzalez said. “I’m still working on accepting how I look. I don’t see the girl from my senior picture.”

“I’m just a survivor period,” the 28-year-old said.Gonzalez doesn’t think of herself as a domestic violence survivor.

She grew up in a single family home and faced a variety of adversities growing up. The adversities steered the direction to the woman that she is today.

“I am more determined than ever,” Gonzalez said. “I am worthy. I am loved. I can do anything. Nobody’s holding me back.”

Passionate about her Children

“My children are my everything,” she said. “There’s nothing I wouldn’t do for them.”

Gonzalez tells her son the cautionary tale of her past and how to properly treat all women.

“I tell him often that nobody controls you, but you,” the single mother said.

Hope to Reach One and Break the Cycle

As a domestic violence survivor, Gonzalez’s goal is for her story to reach and touch somebody. She wants to break the cycle.

“I want my daughter to know her worth, and my son knows how to treat women,” the full-time student said.

Empowered through her Children

Gonzalez’s children empowered her to keep moving and pushing forward. Her son in particular is what she says rescued her from the abusive relationship. It was because of his life, she realized that she needed to leave the marriage.

This mother instills the importance of education to her children. During a conversation with her son, she realized that she cannot ask her children to get an education while not holding herself to the same standard. This summer, Gonzalez made the courageous decision to finish school and obtain her degree in organizational management. She plans to enroll in counseling courses as well.

“I want to help other young women before something else happens,” Gonzalez said.